In the early 1970s, a growing number of people in the region had an interest in traditional music. In Deerton, MI there was a group of people who came to love bluegrass and old-time music. Some of them attended the original Wheatland Festival in Remus, MI, and were inspired to create their own. Around the table in “The Big House” in Deerton, where some of the group lived communally they began to plan an event that would become the Hiawatha Traditional Music Festival.

The group planned some early fundraisers in Munising including the Pigs v. Freaks basketball games and dances in Munising and Big Bay. This money was used to create the first official festival, which was held in June 1979 in Munising’s Bayshore Park. Due to the weather and lack of camping facilities, the event was not as well attended as hoped, but the group was inspired to find a new location to keep the festival going. 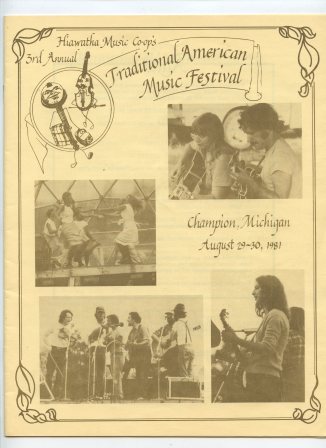 Later that summer, the group decided to hold the second festival at the Horse Pulling Grounds in Champion, Michigan. This space was easier to cordon off and had a shelter, better facilities and places where people could camp. On August 17, 1979, the first “official” Hiawatha Traditional Music Festival was held with around 1,200 attendees. The music stage was a flatbed trailer that was pulled into the site. From the very beginning, the festival was geared toward families, with a children’s area and workshops as well.

“We were setting up a snow fence for a perimeter, and it was actually spitting snow… I thought this isn’t going to go well. Wind blowing, half rain, half snow, oh this isn’t looking good.”

A layout map of the first Hiawatha Music Festival at then Champion Horse Pulling Grounds.

“I believe the high that day was in the 40s. And windy, as Munising harbor is a windy place year round. But everybody danced, as much to stay warm and alive as to be involved in the music.”

“It was a lot of work, a lot of group effort, a lot of meetings-kind of frantically working. Up to the last minute-a lot of details. A lot of delegating. Richard and I were coordinators of it. Everybody pitched in. It was magical – every-thing about it was magical. I met all these new people. All these amazing musicians came to play at this festival that we organized. Everyone was having fun.”

Doug Hardmann tells about the early days planning the Hiawatha festival in Deerton and Munising.

Roy Bookbinder, 2004 – (Singer Songwriter) You Can’t Do That No More